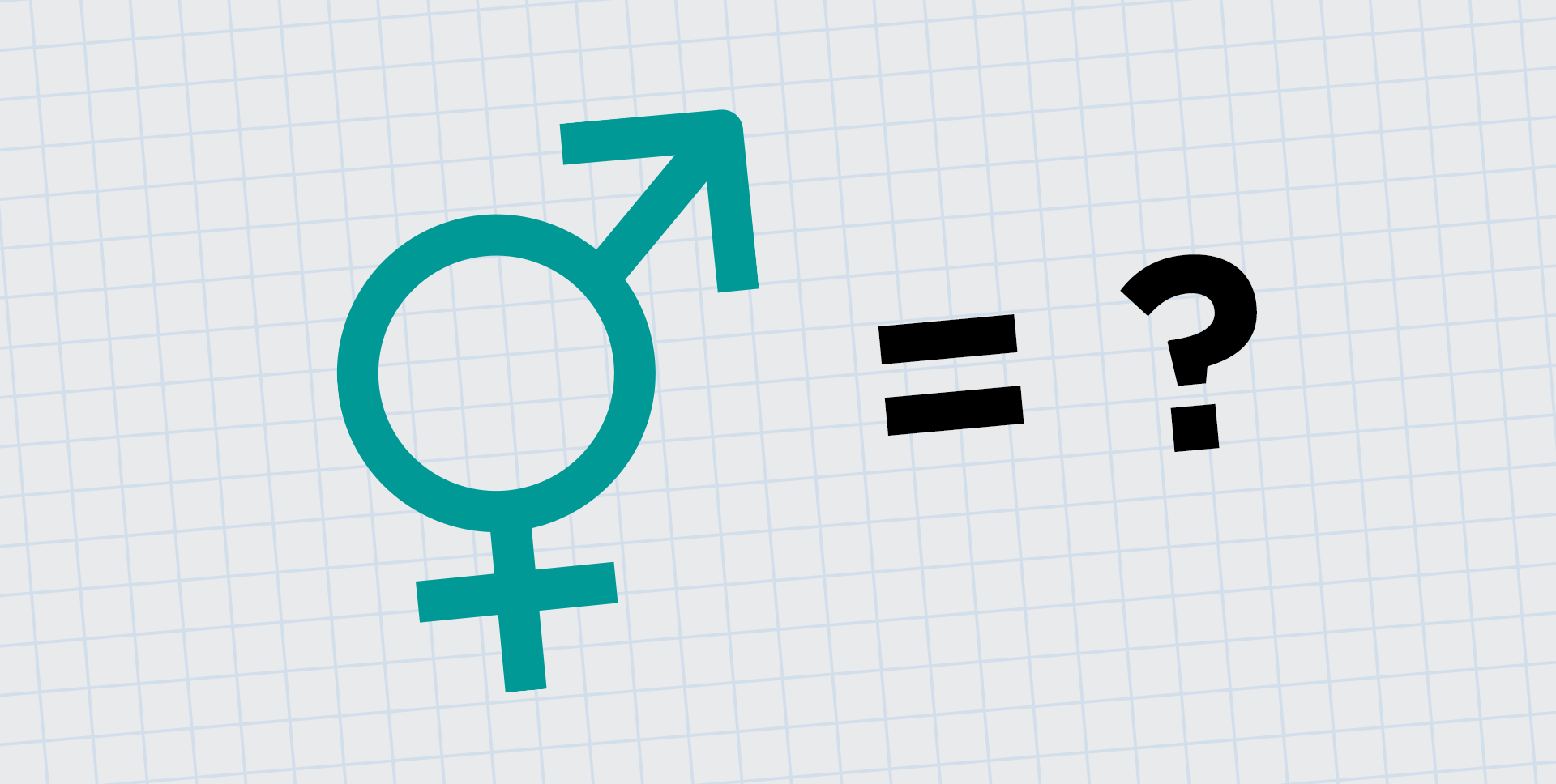 At Kairos we’ve built a series of technologies that allows gender detection in live video and images. Facial biometric technology is fascinating as it frequently emulates many of things that human beings do naturally.

We all see hundreds of faces every day. In most cases, we can tell at a glance whether they represent a male's face or a female's face. But how do we do it? What is there about a person's face that gives away their gender?

According to the Marquardt Beauty Analysis website, there is a "mask" that we can overlay on our face to determine a level of attractiveness. If your face were to match perfectly with this mask, you would be considered extremely attractive to the human eye.

As a whole, women tend to correlate with this perfect mask more closely than men do. Hence, women are generally considered the more attractive gender.

All faces genetically begin following the female pattern. Testosterone, however, changes males' faces away from this pattern. Young boys' faces are not all that different from those of young girls. Indeed, it can be very difficult to distinguish between a baby boy and a baby girl if they are identically dressed.

Thanks to the effects of testosterone a male variant of the "mask" has evolved. Some of the key features of the male variant are:

The emotions that an individual is displaying are likely to impact on the favorable detection of that person's gender. Several studies have shown how particular emotions lead a face to show some of the key defining features of a particular gender, regardless of the person's actual gender. For instance "because expressive markers of anger (such as lowered eyebrows) overlap with perceptual markers of male sex, perceivers would identify androgynous angry faces as more likely to be a man than a woman".

The mismatch similarly occurs in the opposite direction. "Perceptual features of fear (raised eyebrows) and happiness (a rounded smiling face) overlap with female sex markers, ...would be more likely to identify an androgynous face showing these emotions as a woman than as a man".

The Mechanics of Kairos Face Recognition and Gender Detection

The Kairos Face Recognition API functions using still images. All of the rest of the Kairos products can work with live video, detecting faces and providing other useful data, but they make no attempt to recognise the faces presented to them.

Before the Kairos Face Recognition API can recognize particular faces, those faces need to be enrolled in the system. The process involves scanning one or more photographs of a subject (using whatever application is calling the API). A data model of the subject is formed. This data model is later used for comparison purposes whenever there is an attempt to recognize that particular face.

During the enrolment phase, the subject's gender is analyzed. The API does this by comparing the photo in question with thousands of other photos. From this, it determines the likelihood of the subject being of a particular gender at a stated confidence level, based on the bank of past results.

Assume thousands of people with similar characteristics to this subject have been enrolled in the past. If these features are common to male faces, then the API will consider there to be a high likelihood of this photo depicting a male. It will provide a percentage level giving its confidence.

Of course, if the API is required to make its decision based on a single poor-quality photograph, its percentage confidence that the subject is of a particular gender, may be small. The more, and better quality, images that can be scanned, the higher the probability level that the photograph depicts a particular gender.

It is possible, of course, that you have no need for facial recognition - you simply have photos with faces in and you want to know the gender mix of people in these photos. In this case, there is no need for the enrolment procedure. You can simply just scan the pictures, call Detect and the API will give you information about any faces in the images. The information provided includes a prediction of gender.

The Crowd Analytics SDK, Emotions API, and IMRSV for Marketers are all coded to perform face detection on live video. They are all looking for particular characteristics in the video feed that indicate that there are one or more faces visible in the feed. Although all three products use different techniques to find their faces and put a different focus on the outputs they produce, one common feature is that they can determine the genders of any people found. As with the Face Recognition API, these products determine gender by looking for particular characteristics, based on faces that have been scanned in the past.

As its name suggests, the Crowd Analytics SDK provides developers with much analytical information about the people in the image or video. One of the statistics determined by the SDK is the gender of every face in the scene. Again, the result returned to the developer is couched in terms of a percentage confidence that each face is a particular gender.

How Could Developers Utilize Gender Information?

The purpose of a facial recognition API is obviously to assist developers to develop apps that accurately determine a person's identity. Knowing a subject's gender is just one method to help in this. If the gender of a person in a photo does not match up with a similar-looking person's gender in the control data image, there is obviously not a facial match.

Another area where developers could utilize gender detection is with any dating apps they create. It would be quick and easy to process people’s photos through the system, and separate faces by gender. The next app to compete with Tinder could well recognize gender, and add to user friendliness. Indeed, a dating app that streamed live video through the Emotions API could provide some very interesting information about potential matches’ feelings, as well as obviously their gender.

Any apps that are created to assist in data collection for research purposes could incorporate the Crowd Analytics SDK. Data could easily be collected and sorted by the gender of the people in the scene. Big data is considered critical to business success at the moment, and the Crowd Analytics SDK is an easy way to collect and manage the data.

Suppose you want to create an intelligent music player, that chooses appropriate music for people in the vicinity. If you incorporate the Emotions API, it is possible that your app could modify its music selection based on the perceived moods of those present, tied in with their age and gender.

What Could Marketers do if They Could Recognize Gender?

IMRSV for Marketers has tremendous potential. Imagine creating a fully customizable marketing display that adapts itself to whoever is looking at it! This is very much real-world now, not science fiction. You create a kiosk in a relatively public place with good foot traffic. Who takes a look at it? Do you even know? To be honest, traditional displays are frequently put together on a best-guess mentality. The content often is designed to be mildly suitable to the myriad of people who may look at it, without ever being particularly tailored to anyone's particular needs.

Think how much more effective it would be if you could instantly alter that content to match the actual people who are looking at the kiosk. You would include a live video webcam in your display to pick up exactly who was lingering long enough to gain the display’s attention.

The data collected from the webcam could tell that you have two 16-year-old guys present. With this system, you can pitch them that ad for the latest action game. This would be far more valuable than displaying the ad for talcum powder that you have created, and aimed at 60-year-old ladies.

An Alternative Method of Gender Detection

Here is an interesting API that takes a completely different approach to detecting gender. Genderize.io allows you to enter a first name and it will determine a likely gender for that name. The gender is returned along with a certainty factor (a percentage likelihood of the gender being correct) and a count that represents the number of data entries that have been examined in order to calculate the response (to ensure that the suggestion is based on enough samples). This could be use when all you know about someone is their name (and their gender isn't obvious to you from the name). One very useful thing you can do is to use the localization filters to limit a guess, so it is based only on data for a certain country or language. This gets around the fact that names can have very different meanings in different places.

Can the Software Accurately Recognize Gender?

The ability for facial detection and recognition software to recognize gender is still in its relatively early days. There are not all that many statistics available yet. One figure that we know is that the Crowd Analytics API can boast a 92% gender accuracy rate.

The success rate clearly depends on the clarity of the video or photographic material, as well as any occlusions such as hats, scarves, glasses and the like.

When it comes down to it, the success rate for this software relies on the accuracy of all the video you stream and photographs you scan into the system. Thousands of photos were scanned while the software was being developed for training purposes. The gender of these photos was given, and the software was able to determine similarities and differences between male and female faces. As more photo and video images get entered into the system, the success rate for recognizing gender can only improve.