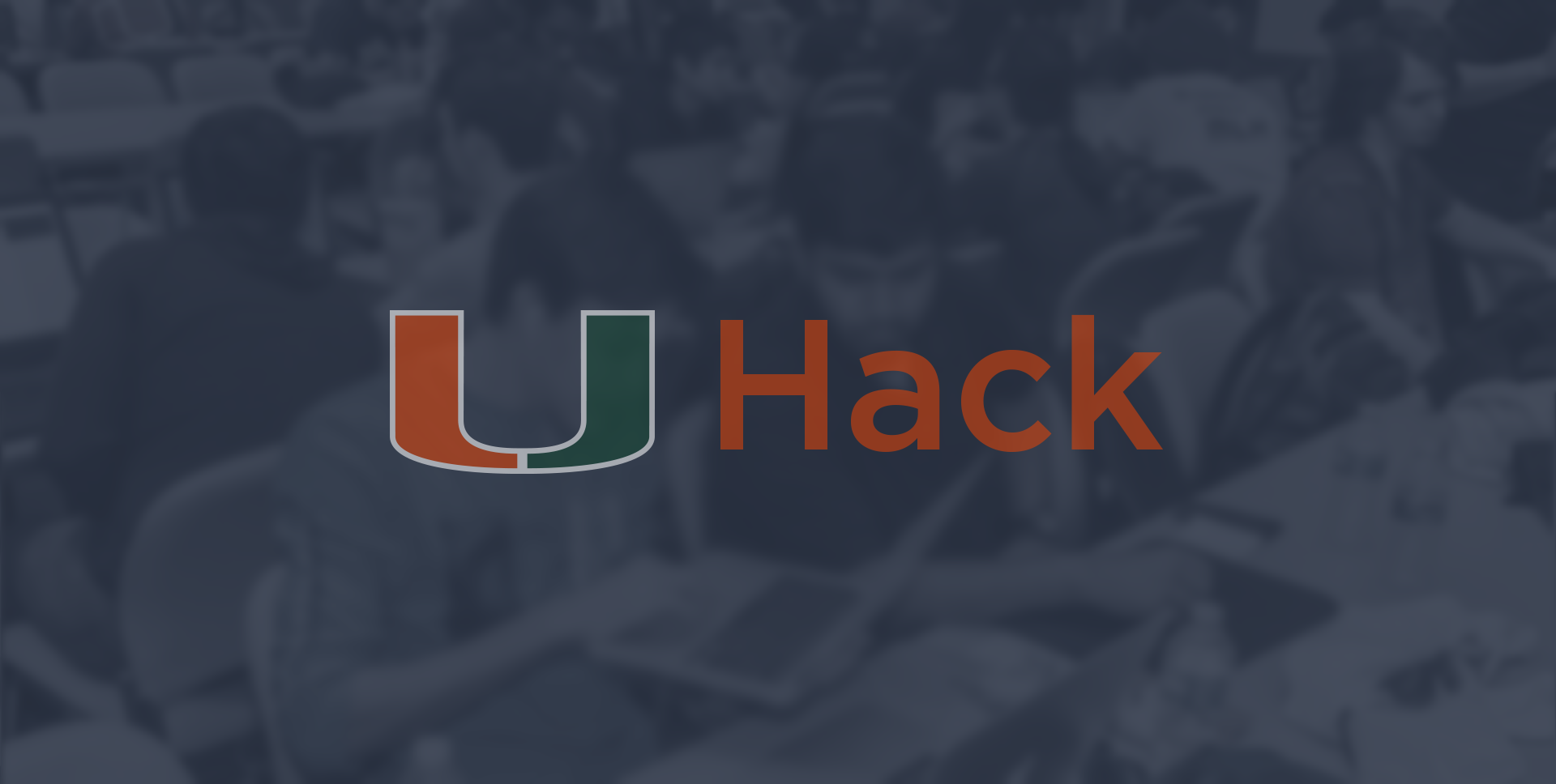 This year’s UHack Hackathon took place at the University of Miami for 24 hours between 21st and 22nd February. Participants were tasked with creating apps along the theme of “Hack for a Better U”, an open-ended topic, allowing for quite a variety of different interpretations. Kairos is proud to have been a local sponsor, and the provider of the first prize ($2,500 credit for use of our Kairos API facial recognition software).

I attended as a representative of Kairos, and spoke to the participants about the Kairos API and how it could be used in their projects. I was certainly amazed by the ingenuity of many of the students’ ideas and their creativity.

There were many teams entered by both college and high school students. After the event I spoke with members of three teams that competed, and created solutions using the Kairos API software.

The Teams and Their Ideas

The first team named themselves Bits Please. It consisted of two team members, Mostafa Abdel-Mottaleb (Github, Twitter, LinkedIn) and Rashed Kashem (LinkedIn). Their idea was a face authentication login system for Facebook. They were able to allow users to register their faces with their usernames and passwords and then proceed to login with nothing but their face. Mostafa conceived the idea and assisted in integrating the Kairos API, while Rashed put together the web application and debugged. 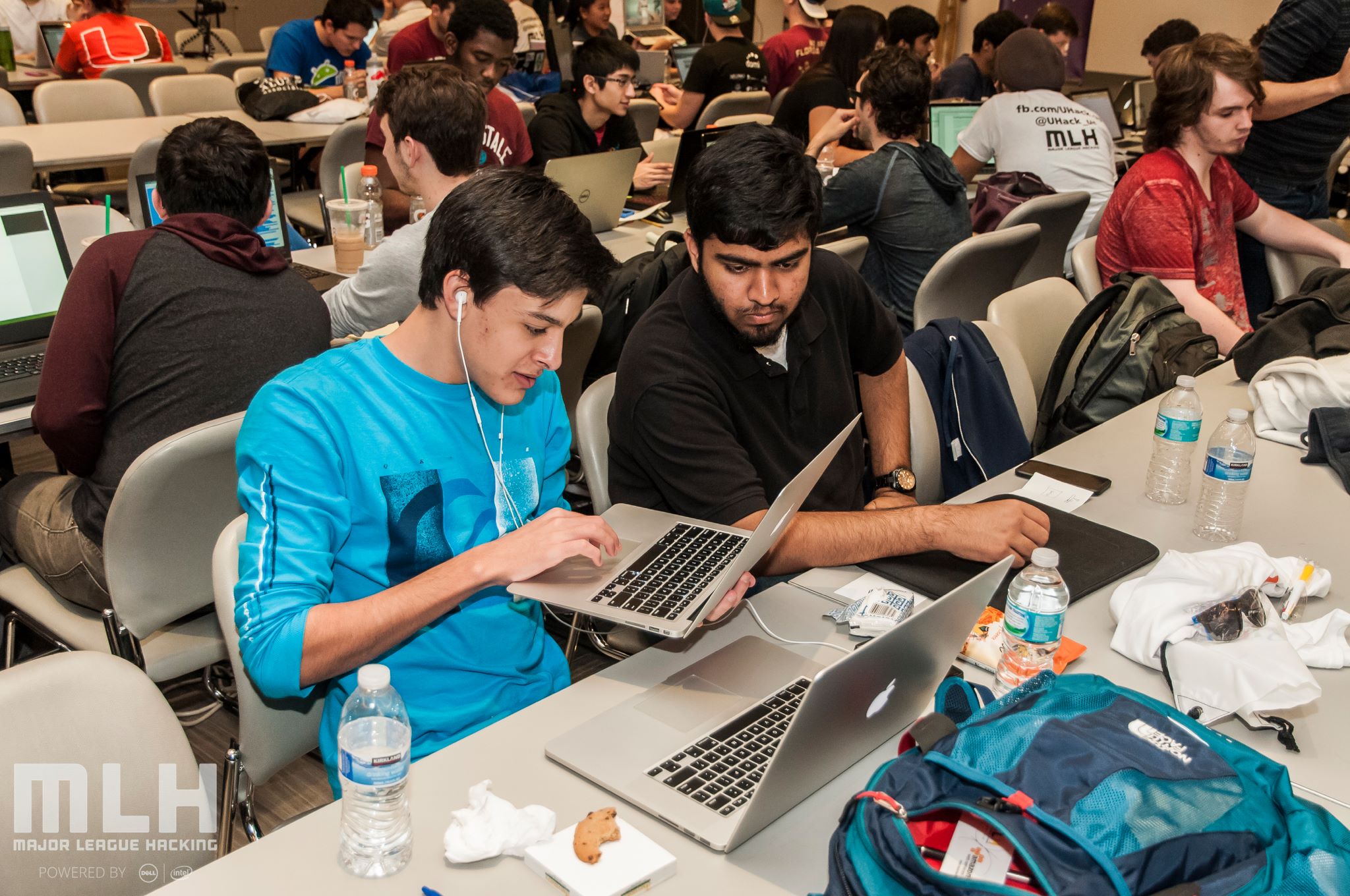 According to Mostafa, his team had arrived at uHack but they still hadn't decided on an idea. After hearing a presentation about the Kairos API, they decided it would be “pretty awesome to use it. We thought logging into Facebook should be with your face. It's just more fun ,simple, and actually makes sense”.

The second team didn’t give themselves a name, although their app was called Facebase. There were three members of this team: Sam Jimenez, Cody Morris, and Evan Ercolano (LinkedIn). Their team’s idea was to develop an app where a user could take a photo of an actor/actress and the app would automatically direct you to their IMDB page. Evan helped develop the backend of the app, which included dictionaries in Objective-C with Sam. Evan also helped work through general problems and suggest new solutions. Cody and Sam undertook the remaining necessary tasks, including the front-end of the app.

Facebase came into existence because the team all had had experiences of seeing an actor they liked or actor they couldn't remember, and wanting an easy way to look up their IMDB page. 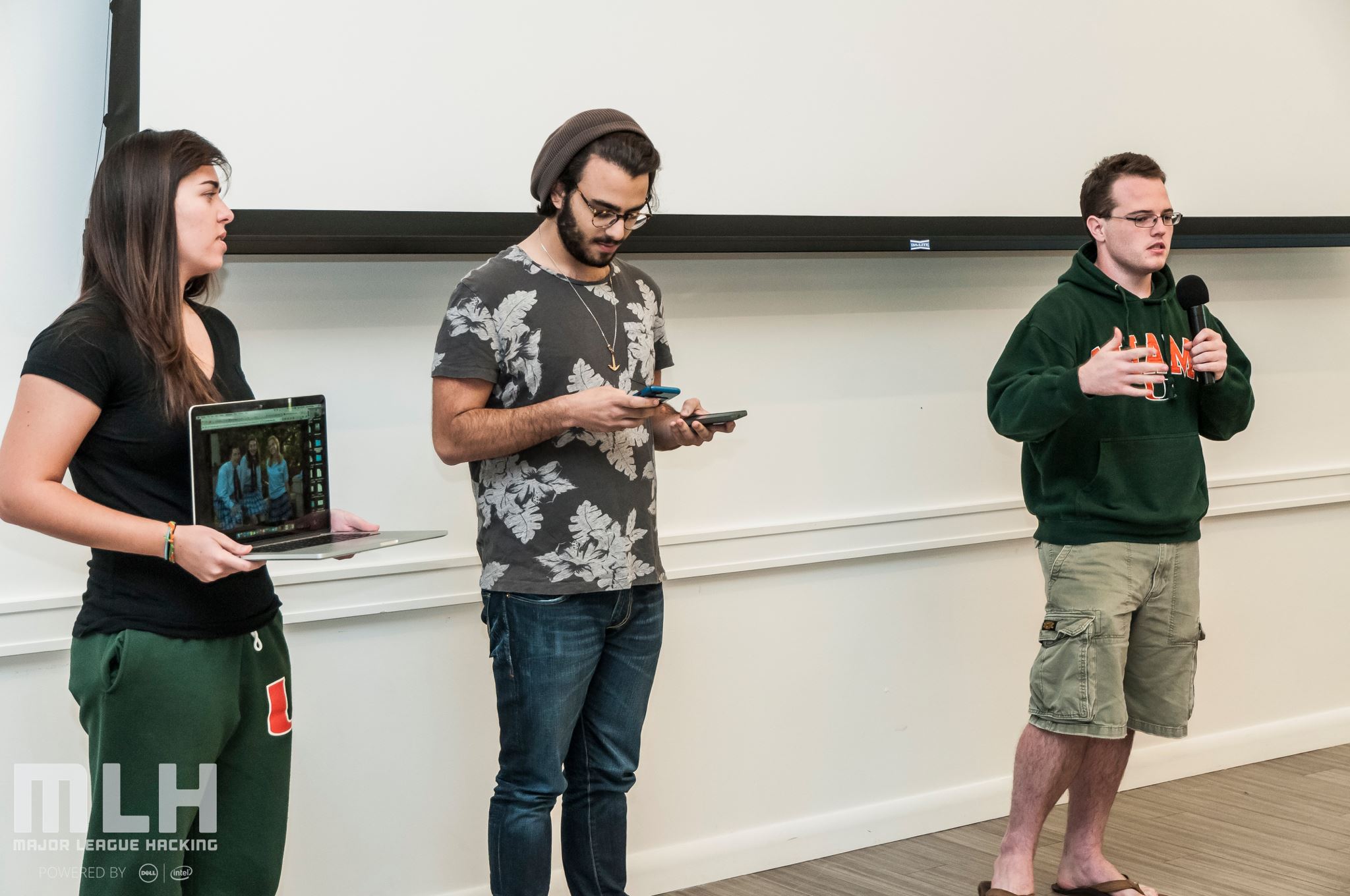 Similarly, although the third team never managed to come up with a team name - “Our creative prowesses failed us there” - they were able to come up with an app name - FaceTheMusic. This was a two-man team of Austin Clifton (LinkedIn) and Elliot Beeman (LinkedIn). Their idea was to make a playlist creation app that would cycle through different users' music selections (for instance at a party or some other group gathering), so that everyone got a fair play time. Austin believes “facial recognition was a really cool addition to that idea, and made our user experience flow super simple. We really liked the end result”.

Austin and Elliot saw the UHack Hackathon as a really great opportunity to try out some APIs that they had never touched before. They knew that they wanted to use the Kairos API, because they thought facial recognition to be really cool. From there they came up with ideas that paired nicely with the idea of facial recognition, but also something that had not been explored too much. While looking at other APIs, the Spotify API stood out as a great contender and the idea for the playlist curation app followed quickly after that.

Working With the Kairos API

The teams generally found working with the Kairos relatively straightforward, which was particularly useful because of the time constraints they faced. Bits Please did have some difficulty understanding the documentation, wishing that there were some more clear examples in there (a possible job for the future for us). A couple of the competitors found that they had difficulty getting their face recognized (with more time they would have been able to enrol a wider range of photographs, 6-8 is optimum). In particular, there appeared to be some difficulty recognizing Elliot when he was wearing his large glasses (a problem which could perhaps have been rectified by including more photos with him wearing these glasses amongst the enrolment photos). The Kairos API picked out the majority of those tested every time.

The Students’ Views on the Future Of Facial Recognition

Mostafa believes that “facial recognition will become ubiquitous in everything we use, for security, for organization, for communication, and many other things”.

Evan believes that facial recognition will be used both for security as well as for authentic identity recognition (as their app, Facebase, used it).

Both Austin and Evan waxed lyrical about the future of facial recognition. Austin believes “as in the case with our application, facial recognition is particularly helpful for designing quick UX flows. We can create different users for a system without ever requiring users to identify themselves, and removing what is normally the initial step in getting someone to actually use an application. But outside of our usage, I see facial recognition as a great way to personalize content based on who's looking at the screen. I could see a large market for companies who already cater to users with ads and the like through their past browsing history, purchases, etc. Usually those systems require some log in identification for that information to be collected, but with facial recognition that step isn't required; although I can't say I'd like having my picture taken all the time when I'm using my computer. Security is a big concern with facial recognition in my opinion - recently I saw facial recognition being used as login for a friend's computer, but how difficult is it to make your computer think I am you? And when using facial recognition on the Internet, how do we protect users' privacy?”

Evan enthusiastically adds to his teammate’s comments. “Like Austin said, I think that using facial recognition in a more relaxed, passive way seems to be the best application for the technology, at least for now. As the technology gets better, I think the applications will spread, and could be a very viable security measure when paired with other methods. There are many situations when it would be advantageous for some item or device to recognize who you are, and in the future I can see facial recognition being integrated into most if not all of those devices. Imagine a work fridge that would recognize you and then either store or retrieve your lunch. The opportunities are endless”.

There is no surprise that these students have a technological bias. Although some are still at high school, others are at differing stages of their University of Miami training (with Elliot due to graduate this May). Most of them, nonetheless, are studying Computer Engineering, usually with a concentration in software development.

Most of these students see their future in the computing and technology industries. Mostafa, for instance is hoping to end up in a job mainly utilizing application software development, robotics, and/or artificial intelligence. Similarly, Rashed is interested in any job using software development or making hardware contraptions, as well as requiring advanced technological expertise.

Although Evan hasn’t yet decided what specific part of the software industry he would like to work in, he does state “I do have interests in working at a company who’s passionate about their products with employees who push each other to learn in diverse teams. I would love to experience either a tech startup or a bigger tech company, I’m pretty open in this regard; I believe both have great potential learning opportunities”.

Both Elliot and Austin are gamers at heart, and they both interned at the same games company. According to Austin “I've been a gamer since I was young, got a chance to work at a game dev startup last summer, and am itching for more work in the game industry. I'd love to work for a big game development company. In any case, I really want to be somewhere where I'll be challenged with real tasks, and where I'll be able to learn and grow and make an impact all at the same time. That's the most important thing in a job for me”.

Elliot adds “I really enjoy working with smaller companies and I love to solve complex problems ... I have a passion for video games, and I loved the work we were doing. So I think a smaller technology or video game company would fit my interests and skill set perfectly.“ 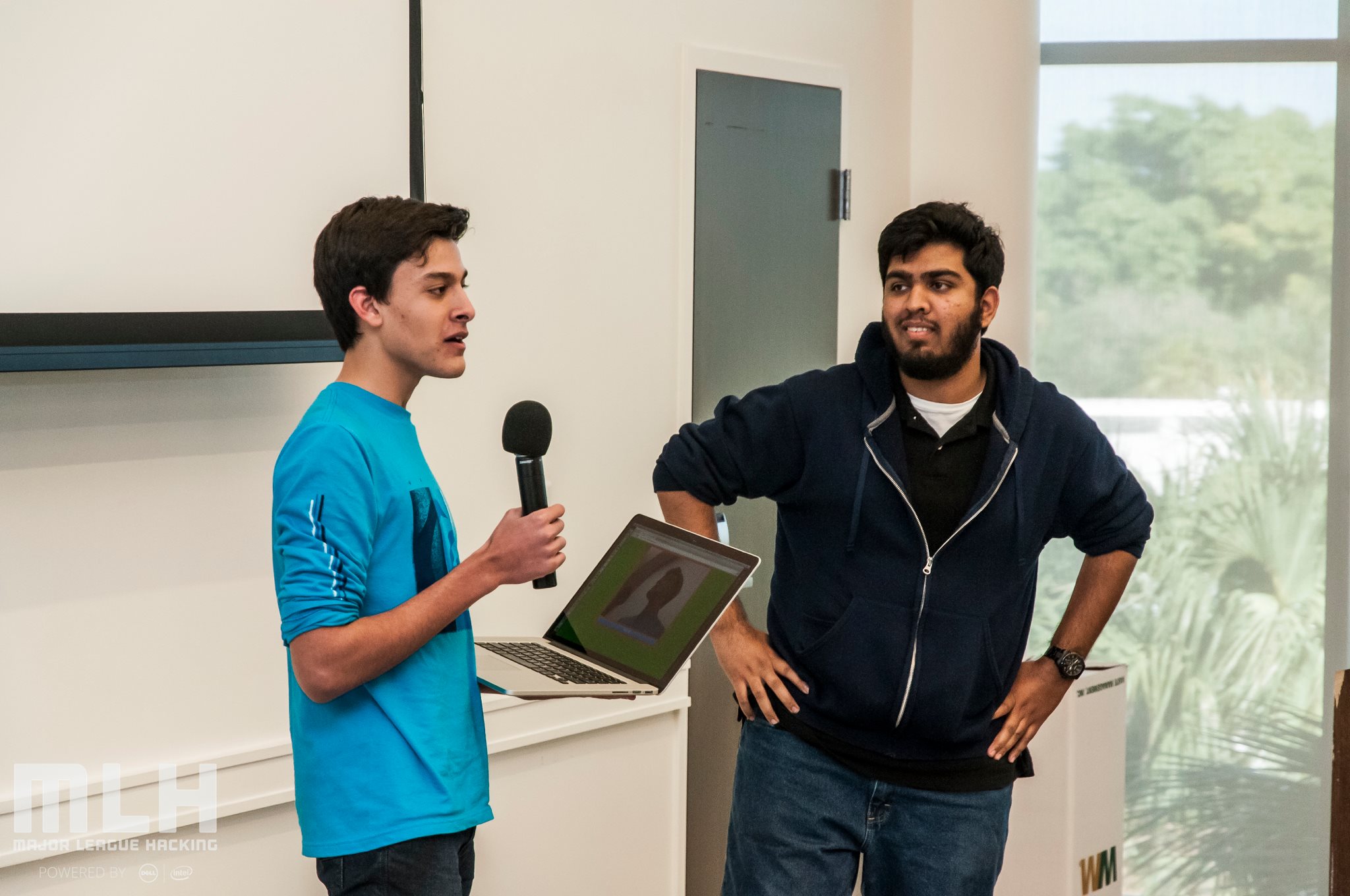 These students are the future of the tech industry. They have demonstrated that they have skill, imagination and flair. They have dreams to match it. They have shown how easy it is to use the Kairos API in practical situations, even when there are limitations of time and resources.

The UHack Hackathon was a great showcase of Southern Florida’s young technology talent. Kairos is proud to have been involved, and wish all of the competitors the best for their future careers. Who knows what innovations these young men and women can come up with over their lifetimes. 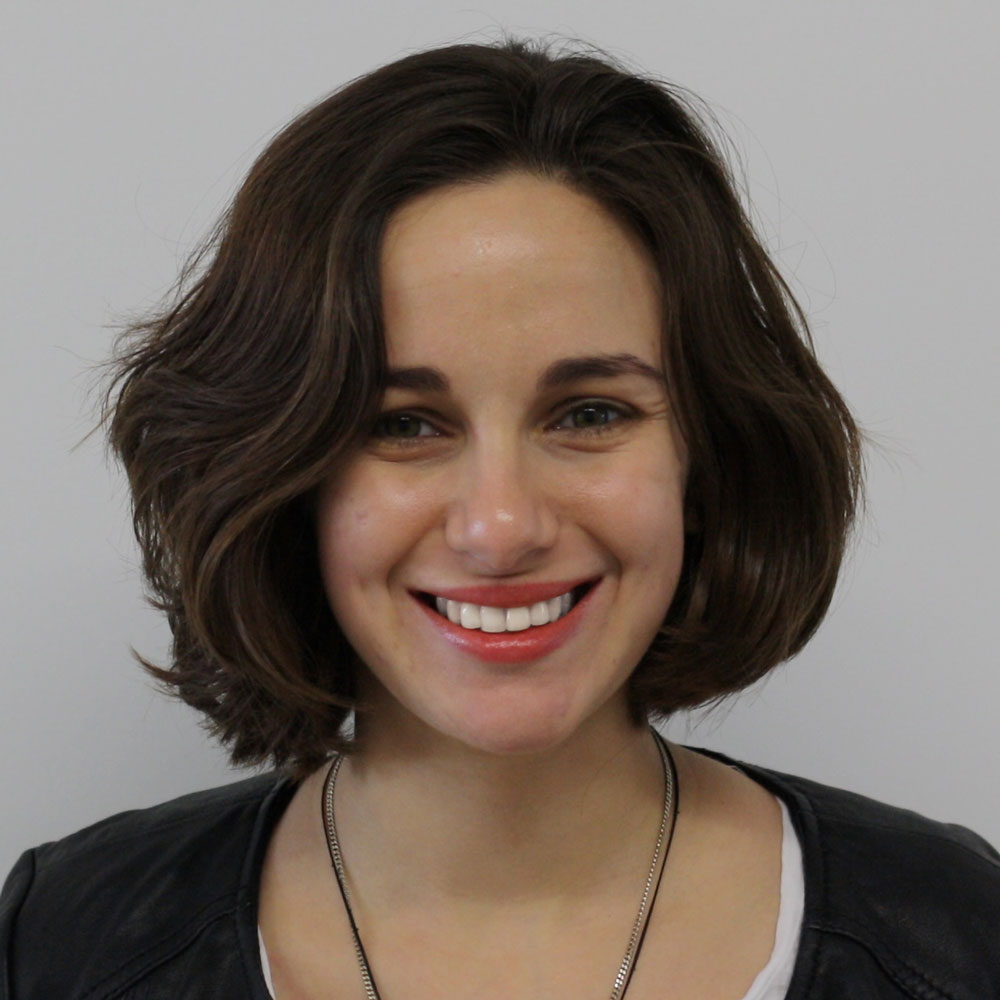